And The Winner Is…

Proudly Sponsored by the A.I.M. Academy

Practitioners travelled from all over regional Victoria, interstate and as far as New Zealand to seize the opportunity to learn from Taira Sensei.

Taira Sensei demonstrated how the techniques in Kata could be applied to an opponent and also showed many variations that challenged even the most experienced practitioners.

“For someone who doesn’t have a Goju background and intimate knowledge of the Kata, I attended this Seminar predominantly to observe a Master in motion. It’s not often you get to see a martial artist of his calibre in action!

For the Karate practitioners there, Taira Sensei’s translation of Kata to Bunkai was priceless.

Not coming from a Karate background, I wanted to understand the principles he used for combat, more so than the relationship of Kata to Bunkai.

His use of angles, body weight and ability to “set up” or set traps for the opponent were most impressive.

The suddenness & explosiveness of his movement & his ability to generate tremendous power at close range was inspirational and something to aspire to.

I highly recommend Taira Sensei’s future seminars to all Karate practitioners, regardless of style, and any martial artist who’s looking to take their understanding of combat to the next level!” 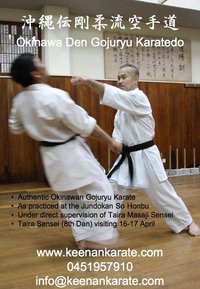 Special thanks to Bryson Keenan of Bryson Keenan’s Martial Arts Centre for bringing Taira Masaji Sensei to Melbourne for this two-day event!

Anyone who is interested in furthering their Bunkai training should get in contact with Bryson Keenan at info@keenankarate.com